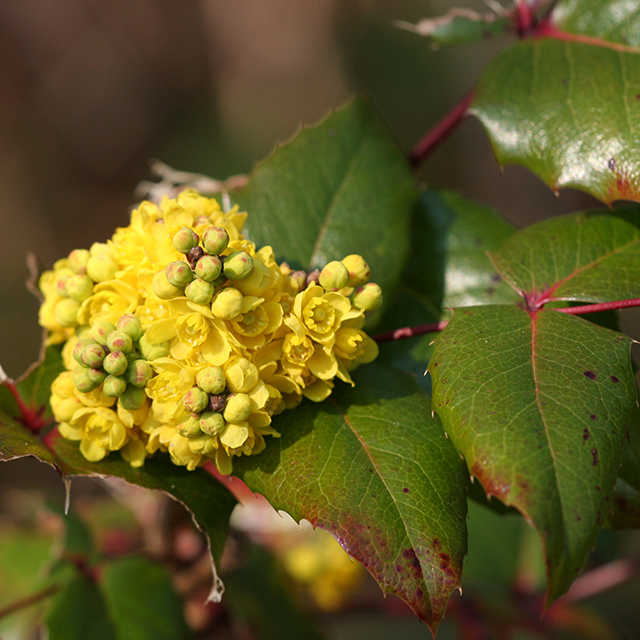 Avoid during pregnancy and breastfeeding unless professionally advised otherwise.

Contraindicated in jaundice in neonates.

Avoid alongside phenylbutazone and other medications which displace protein binding of bilirubin.

Care should be taken with chronic skin conditions; possibility of exacerbation, seek advice if in doubt.

Habitat: Berberis aquifolium is a native plant in the North American West from Southeast Alaska to Northern California, and eastern Alberta to central New Mexico, often occurring in the understory of Douglas-fir forests (although other forest types contain the species) and in bushlands in the Cascades, Rockies, and northern Sierras. In some areas outside its native range, it has been classified as an invasive exotic species that may displace native vegetation. It is valued for its striking foliage and flowers, which often appear before those of other shrubs. It is resistant to summer drought, tolerates poor soils, and does not create excessive leaf litter. The fruit makes a delicious country wine, although the root is the part used here and traditionally in herbal medicine.

• A variety of chronic skin conditions  including psoriasis, eczema, dermatitis and acne (taken internally and topically)

Disclaimer: The information on this website is provided for educational use only, and is not intended as a replacement for the services of a qualified medical herbalist, doctor or licensed health practitioner. The information contained herein is not diagnostic, always consult a medical health professional before embarking on a treatment programme. Urban Fringe Dispensary disclaims any liability, loss, injury or damage incurred as a consequence of the use and application of the advice given herein.