Please note we are closed on Good Friday and Easter Monday 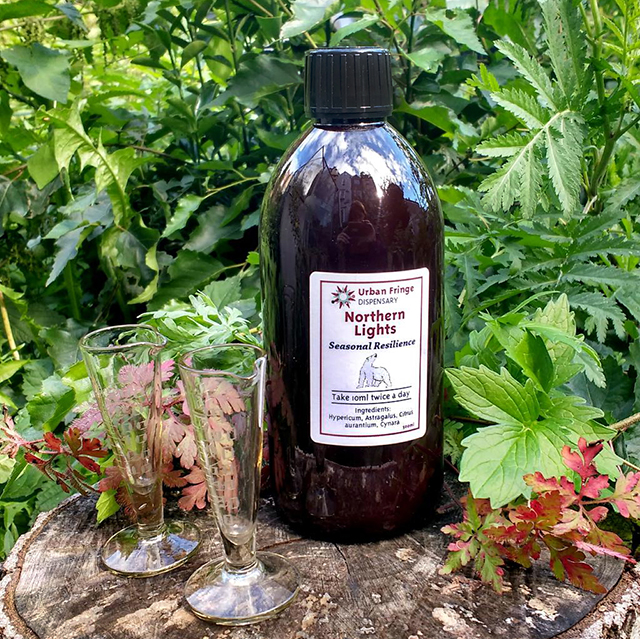 Northern Lights is a blend of four herbs designed as a winter tonic to address general wellbeing.

These are whole plant extracts in 45% organic alcohol.

Northern Lights is a blend of four herbs designed as a winter tonic to address general wellbeing. We have worked on this concept over several years and have arrived at this simple formula to suit many people - although, of course, we are all different and acknowledge that this isn’t for everyone. However, this is the one that has generally worked for our patients and customers (and us!). The recipe is as follows:

Artichoke leaves have high mineral content giving a salty and slightly metallic taste. The herb is said to be hepatoprotective and contains anti-oxidants, both of which help with detoxification. Therapeutically it is traditionally used to aid digestion and support liver function.

This is an adaptogen best known for its ability to strengthen and support the immune system. More specifically, if taken over time Astragalus has been demonstrated to increase IgA in the upper respiratory tract, an important part of our defence against airborne pathogens such as viruses. It is a relatively mild, sweet tasting tonic herb and needs to be taken regularly throughout the season.

Bitter orange peels contain high amounts of flavonoids and lend a delicious bitter orange taste to the mix.  It’s presence here is to help with digestion and enhance the absorption of the main tonic herbs.

St John’s Wort is traditionally used to treat mild to moderate depression, and as a nervine we have found it to be particularly suitable for some people with seasonally affective disorder (SAD). We advise that you familiarise yourself with possible interactions and side effects with other medicines if you are taking them concurrently. It generally takes 3 or 4 weeks to feel the real benefits of St John’s Wort, so it is important to take it regularly.